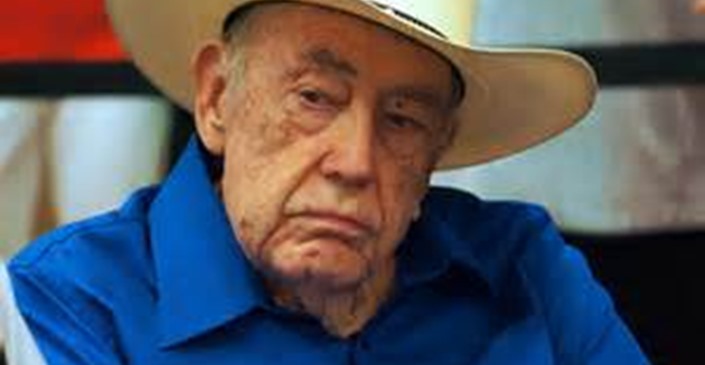 Doyle Brunson is the back to back champion of the first two world series of poker. Born in Texas in 1933, Brunson was always competitive as he was drafted to the Minneapolis, now the Los Angeles, Lakers. Although a knee injury ended his basketball career the NBA would not be the way Doyle would provide food for his family.

Brunson graduated with a Master’s Degree in Education and hung up his basketball jersey for good, replacing that passion with another – poker.According to legend, Brunson was the first rounder making trips from one poker game to the next collecting money. Doyle found a way to make a living meeting other large names along the way. One in particular was Johnny Moss who was infamous for large betting respectively in his era.

Doyle married in the sixties and had four children with his wife Louise. Brunson was finding that invitations to the poker games he needed were lacking. Thus he decided to pack it up and head out to Vegas with his family.

It is said that he won all of the money in Texas and therefore nobody wanted to play with him. Establishing himself in Vegas he won the back-to-back World Series of Poker ironically with the same finishing hand now his trademark the “Doyle Brunson” which was 10-2.

Other professional poker players were not as happy as the rest of the world with the release of “Super/System”. They felt that Brunson was not right in giving away his secrets to the game. Although it can be argued that this book gave rise to a new wave of popularity for the sport and increased the competition as well.

His next book “According to Doyle” was a collection of the best columns he felt he wrote for an old magazine named the “Gambling Times”. This book was also considered revolutionary as Doyle was showing the world that gambling could be considered a profession and a high-paying one at that.

He may have left the gambling circle publicly around the eighties but it has been noted that he would play golf for ridiculous sums of money. Legend has it he once commented that he played for more money than the pro golfers. It was not uncommon in those days for Brunson to have close to a quarter of a million dollars in sports bets at any given time.

A true gambler Brunson helped to popularize the sport of hold-em which he will most notably be remembered for.

At the current time Doyle Brunson holds ten bracelets from the World Series of Poker.

Although the underground ring is still what he has been famous for in the amount of five to six decades. One of the first three inductees to the Poker Walk of Fame Doyle is still living large at seventy-plus. Doyle has total winnings of almost 5 million dollars publically known and has won and lost average persons annual income in a single hand and that is why he is the Grandfather of Hold-Em.