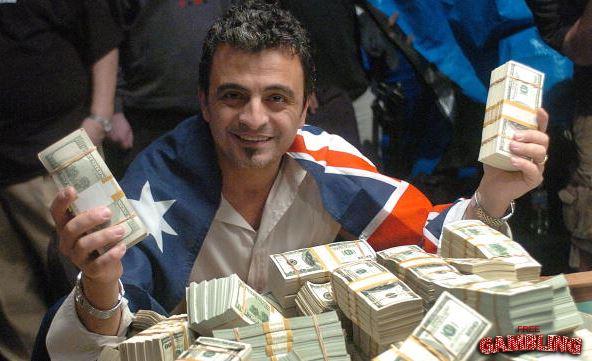 Joe Hachem, a native of Lebanon moved to Australia with his family in 1972.  He was working as a chiropractor but due to a blood disorder, he gave up his career and started playing poker. He lives with his wife Jeanie Hachem and has four children, Anthony, Justine, Daniel and James.
The first recognized win was his $25,850 in the $1,000 buy-in No Limit Hold’em World Series event where he got the 10th position.

Just like Raymer and Moneymaker, Hachem also represents Poker Stars. He entered the tournament by a full buy-in and not an internet qualifier.

Hachem won the second place in the $2,500 short-handed no limits hold ‘em event at the 2006 World Series of Poker.

He finished fourth in the $2,500 pot limit hold ‘em tournament as he was eliminated as he took a bad beat in the river.

He also participated in the Poker Superstars III but missed the super 16 round by just one point.  He also made the final table in the World Series of Poker Circuit event.

In 2007, he won various titles line the Poker Stars APPT Tournament of Champions in December. The single table included the winners of the previous tournaments.

And the total winnings in the year 2008 alone his winnings exceeded $10,700,000. He is the third highest in the career earnings of live poker tournaments.