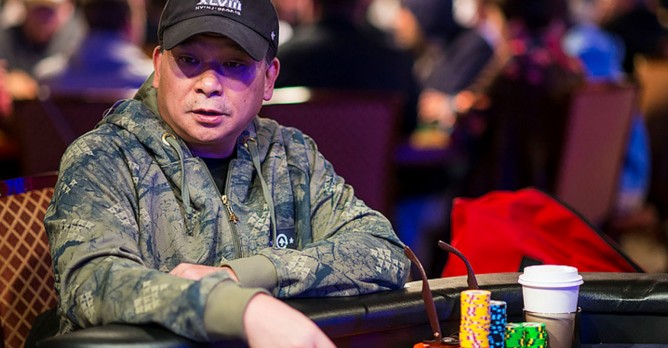 The Silent Sniper A.K.A. The Orient Express

Aside from Doyle Brunson, Johnny Chan is the most well-known poker name in the world. Just like his predecessor Doyle, Chan holds currently ten World Series of Poker bracelets. As well just like Brunson Chan became famous for winning two back to back championship events in 87 and 88. Nicknamed the Orient Express Chan can be found in the most famous poker movie of current times “rounders”. In this movie there is footage of Johnny Chan’s victory over Eric Seidel in the 1988 World Series of Poker. Also note that Chan finished second in 89 loosing to another famous name Phil Helmuth.

In approximately 1968 Chan moved to the United States from Hong Kong with his family. At first arrival they owned some restaurants little did they know they would not have to work hard to earn money. It has been said Chan started playing Texas Hold-Em in the early 80′s and the rest is history. According to fact at the age of 21 Chan dropped out of college in Houston to become a professional gambler.

Known for keeping a lucky orange in front of him, Chan says he likes the smell, Chan has aspirations of opening his own casino. With ten bracelets and six children under his belt Chan used to hide his poker addiction by claiming he was bowling!

It is no secret that he is the first Asian to be inducted into the Poker Hall of Fame. Johnny Chan is regarded as one of the best all-around players in the world, and he has excelled at the highest-stake cash games for a number of years. It should also be noted that Johnny Chan has trail blazed the way for Asian poker players. Nowadays an Asian at the poker table is expected.

However, this was not the case twenty years ago. Thus he is idolized by the old and the new generation of Asian players.
Considered a living legend at the table Chan’s accomplishments are never far from impressive. When he won back-to-back titles the owner of the Lakers Jerry Buss promised him a NBA championship ring if he could win the third.

Chan has rose from an emotion kid to a consistent mature winning adult. As one of the most feared competitors at the table Chan and his orange will always be seen as a threat.